Mention ‘the tip of borneo’, the one in Kudat, Sabah immediately comes to mind. This reference has become so popular that its actual name, Tanjung Simpang Mengayau, has become an afterthought.

Regardless, this significant landmark should be on the intrepid traveler’s bucket list. To be exact it refers to the northernmost tip of Borneo where two seas meet; the South China Sea and the Sulu Sea. Devoid of markers, this metaphor is a matter for your visual imagination. The view is magnificent. The expanse evokes grandeur and the stormy seas give perspective to human frailty. Furthermore, this popular tourist attraction is an accessible 2.5-3 hour drive from Kota Kinabalu, the state capital of Sabah.

But to ascribe a cardinal direction to a place begets the next question. Where are the southern, western and easternmost tips then?

The Cardinal Extreme Points of Borneo

After Tanjung Simpang Mengayau, the remaining three points are located in Kalimantan, Indonesia. They are the southernmost, easternmost and westernmost ones.

Location map of the respective extreme cardinal points of Borneo. Included are the southernmost tip of Malaysian Borneo and attractions in the cape area.

There is no southernmost tip per se to follow the conventional wisdom. Instead, it is a point along a secluded stretch of beach in South Kalimantan. And this is exactly how Google Maps displays it – ‘The southernmost point of Borneo’. Its nearest landmark is about 2-km away from Menara Suar (lighthouse) Tanjung Selatan.

Unlike the northernmost tip, there’s nothing much to do here. Should you venture this far, you can claim to be further south than anyone in Borneo! This may not be the bragging rights for many. But, there’s definitely one at the South Kalimantan’s Chempaka Diamond Fields. In 1995, local miners unearthed a sparkling diamond the size of a pigeon egg. . Named the ‘Trisakti’ stone, the diamond weighed 166.67 carats.

Banjarmasin is the provincial capital of South Kalimantan. The city has its fair share of things to do. For one, you can hunt for bargains at the Diamond and Jewellery market!

This point is in the province of East Kalimantan. What this easternmost point lacks above ground, the sea north of it more than makes up for it. This is where a group of 31 islands known as the Derawan Islands cluster. The sea here contains some of the richest marine biodiversity on earth. And the islands are set up for tourism; scuba diving, snorkelling and resort living. So, it comes to no surprise that Derawan Islands is in the country’s tentative list for a World Heritage site.

The Mahakam river is the lifeblood of the province.  It runs through the provincial capital, Samarinda. River boat tours are the mainstay on this third longest (980-km) river of Borneo.

23-km away from the westernmost point of Borneo, is the provincial city of Singkawang. It is the only town in Indonesia with a distinct oriental feel. Reason being that 70% of the population is of Chinese origin. The hundreds of Chinese temples dotting the landscape lend credence to the atmosphere. In particular, the city organises the biggest Chap Goh Meh procession in the world. This marks the end of the Chinese New Year celebration.

Singkawang is the closest Indonesian city to the Sarawak capital of Kuching. Land travelling time takes about 5 ½ hours including a border crossing.  There are two checkpoints. On the Indonesian side is the Aruk Custom, Immigration and Quarantine centre (CIQ). The Biawak CIQ makes up the Malaysian side.

Now, let’s take a step back to explore this transboundary connection further. As we have one more ‘point’ to make! This tip deserves a special mention.

Jutting out into the South China Sea, lies a tip of Borneo of regional significance. A white border stone marks the end of the Indonesia-Malaysia land border. Two lighthouse structures stand on their respective side of the border.

The truth of the matter is ‘Where Borneo Begins’ has nothing to do with geology. It is a tourism tagline inspired by the migration pattern of the oriental honey buzzards.  These large birds of prey would make Tanjung Datu their first land stop in Borneo.

This first recorded use of the tagline appeared in 2012. The then Minister of Tourism, Sarawak had launched a landmark board as seen above. The usage continued in the title of a paperback published in 2015.

The protected forest status has enhanced tourism value to the cape. This is especially so for the Tanjung Datu National Park. Over the years, tour operators have run tours to this western corner of Sarawak. International travellers have come to spot wildlife or do trekking. You have a high chance of watching turtles nest here during the peak turtle breeding season. Between April to September. Three species of turtles; the Green, Hawksbill and Olive Ridley turtle land here.

The Mount Asuansang Nature reserve on the Indonesian half holds similar nature experiences. The same applies to turtle landing watches at the Turtle Monitoring Post of Sungai Paloh. In addition, the unspoilt coastline offers beach accommodation and idyllic beach experience. Nonetheless, this side of the cape remains an off-the-beaten path tourism destination.

Travelling between Indonesia and Malaysia may look convenient on paper. What with the border* crossing a mere 1.8-km from the highway turn-off. But it is not a matter of showing up with a passport. The bureaucratic process to comply requires a private tour arrangement.

*This border post does not refer to the two CIQs mentioned earlier.

The 2,083-km Pan Borneo Highway stretches from Telok Melano, Sarawak to Serudong in Sabah. Some sections are still under construction as of the 27th Oct, 2022 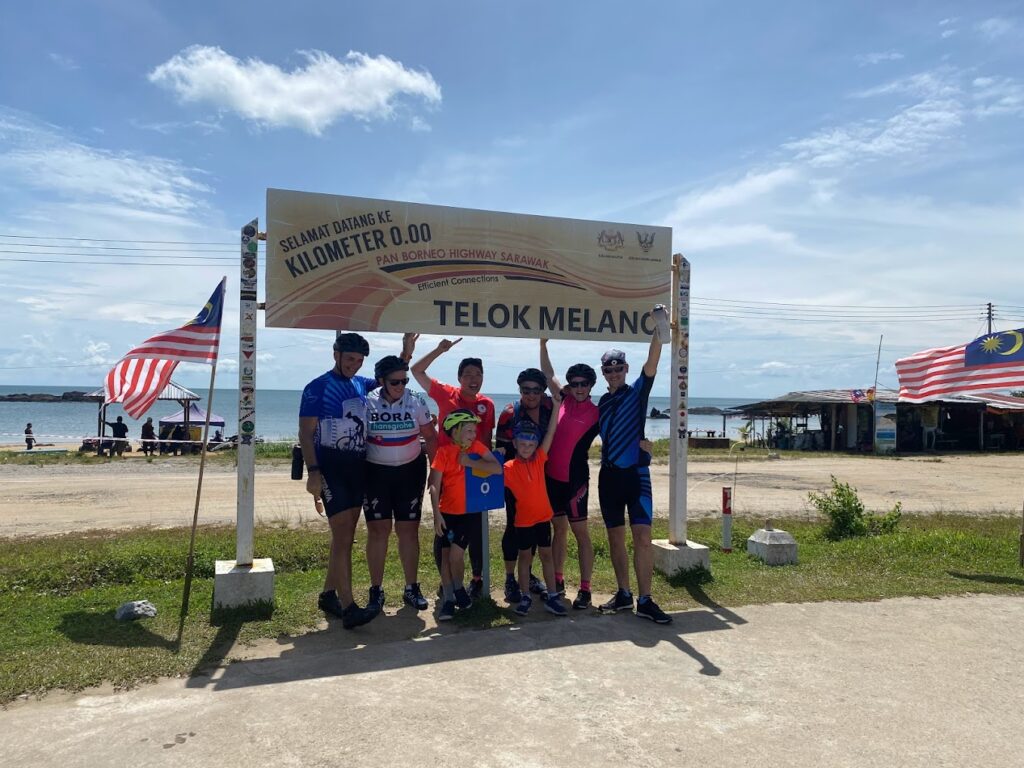 Telok Melano is a smooth 2hr 40 mins drive from the state capital of Kuching. Next to it is Telok Serabang. Invariably, community-based tourism activities have sprung up between these two malay villages. The Kilometre 0 of the Pan Borneo Highway starts from Telok Melano. It has, in no time, become an iconic landmark in itself.

Even though Tanjung Datu National Park is next to Telok Melano, there is no road link between the two. But the fact that one can trek to the national park means that it has become a year-round destination. An easier mode of getting to the park is by boat subject to sea conditions.  At Paradesa Borneo, we offer you a visit to the national park as an extension tour, bundled in our tribute to the ‘Tip of Borneo‘ package.

As we loop back to THE tip of Borneo, it is interesting to point out a new cardinal direction pair. For what it is worth, Tanjung Datu is the southernmost tip of Malaysian Borneo!

Brought to you by Team Paradesa

Responsible Travel Tips for Things to Do in Kuching